How to Protect Yourself from Lightning When Camping 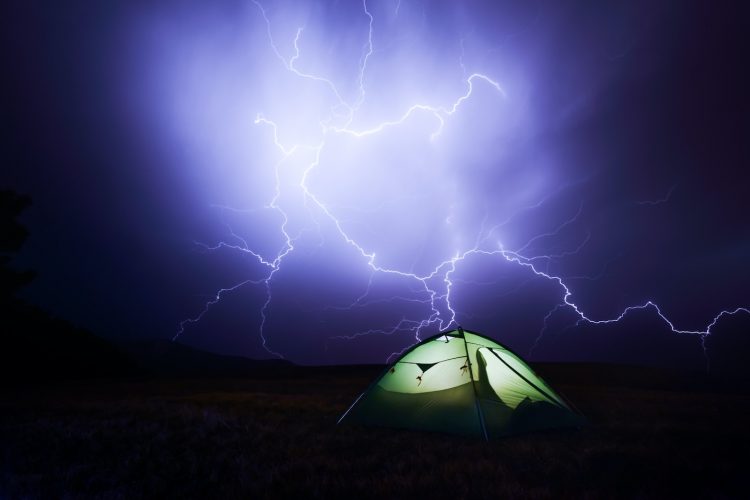 Imagine you and your family of four in the middle of a summer camping trip. You have all been out on the campgrounds for several days. Everything is going well so far. The kids are enjoying themselves, learning how to tell poison ivy from box elder, cooking freshly caught fish and smores by the campfire, and adjusting to nature’s quiet rhythms. They are learning to appreciate the wild outdoors as much as their everyday lives back in the city.

Then, off in the distance you see storm clouds approaching. The adrenaline starts pumping, because you were certain skies would be clear until long after the camping trip was over. You suddenly realize you haven’t checked the weather forecast on your radio for a couple of days. The sky darkens quickly, and everyone is inside the tent as sprinkling rain begins to grow into a full-on downpour. Minutes later, there is thunder. And you know what comes after thunder.

The first thing that comes to mind when talking about lightning is The National Weather Service’s popular refrain: “When Thunder Roars, Go Indoors.” It’s simple, memorable, and obvious. Unfortunately, campers still get caught in lightning storms with little knowledge of lightning itself, minimal preparation time and few escape options.

By the time a lightning storm comes, its often too late to escape danger. Nature is unpredictable and cruel. Anyone planning to camp anywhere at any time should be informed about the terrain’s weather patterns before and during their trip. Unfortunately, we are human and often find ourselves in situations we never dreamed we’d be in until it’s too late.

Know how to protect yourself from lightning when camping. Much of the information here will sit in the realm of preparation, but not to worry. You will learn what to do during a lightning storm you and your family can’t avoid.

What Should Campers Know About Lightning?

Lightning is an amazing phenomenon to see, from a safe distance. Thunderstorms are attractive to people for this very reason. It is exciting—the hammering rain, the clapping thunder, and the brilliant, cracking bolts.

Lightning storms are generated by opposing electrical charges in the clouds. In a thunderstorm, particles with a positive charge accumulate at the top of the cloud, and negatively charged particles travel to the bottom. Once both opposing charges are big enough, an electrical discharge is formed.

When not a safe distance away, lightning is extremely dangerous, and often fatal. It’s not a direct hit from the strike that you should worry about; According to the National Weather Service, only 3 to 5 percent of lightning strikes hit humans this way. In comparison, 50 percent of lightning strikes are caused by the effects of a ground strike. When lightning hits the ground, there is a ground current that extends 50 to even 100 feet away from the strike itself.

While the ground current is the main culprit of lightning strike victims, side flashes hold second place. When lightning hits a tall object, the discharge can jump from the object to you in an instant. Such side flashes account for about 30 percent of strike victims. The best way to avoid a side flash is to set up camp away from the tallest structures in the area, no matter how beautiful the view or safe a campsite it may appear.

Ideally, the location of the campsite would have thunderstorms in mind. There is always a chance you won’t be able to take down and re-pitch your tent elsewhere before the lightshow begins. If you find you have camped in an area that is dangerous during a lightning storm, you and your campmates must seek shelter. The moment you hear thunder, it’s time to move. The best place to run to is an enclosed building. Avoid outhouses, picnic shelters, and similar buildings. Those structures either do not enclose you fully or do not have internal plumbing and wiring that can guide the lightning strike.

The next safest place to take cover is inside your all-metal vehicle. If struck, the car creates what is known as a Faraday cage—a shield from electric fields.

What if there is no secure building in sight, and your car is too far away? Your next option is to move to an area with lower level trees and bushes that are less likely to attract a bolt.

What is the 30/30 Rule for lightning? It is a way to predict the location of the thunderstorm, and therefore the lightning, as it heads closer and closer to your site’s direction. As your group seeks shelter, you must count the seconds between a lightning strike and the sound of thunder. If it’s less than 30 seconds, if you haven’t already, get inside that building or all-metal car. The second “30” accounts for the number of minutes you stay inside after the thunder subsides.

Worst Case Scenario? Get in the Lightning Position

The absolute worst-case scenario — which you want to avoid as early as you can — is getting too close to the lightning storm to escape it. To lessen the chance of the unthinkable happening, remember to get in the lightning position if you know you are within range and can’t get away.

The position is a kind of crouch, with both feet planted as close to each other as possible, heels together. This is to prevent you from having more than one point of contact between you and the ground. Don’t sit down on the ground, or you will create more points of contact. The less points of contact you have with the ground current, the more likely you are to survive an electrocution. You crouch down low to reduce the chance of getting hit by side flashes or upward leaders (strikes that bounce back up when there is a positive cloud-to-ground flash).

Can You Get Struck by Lightning in a Tent?

No place is 100% safe from lightning once you are out in the middle of the storm. Some places are just safer than others. Where do tents fall on the safety scale? Unfortunately, depending on where your tent is positioned, you may as well be standing in the middle of an open plain. There are no lightning proof tents.

Where the tent is placed matters, somewhat. If there is enough time to prepare before the storm hits, do so accordingly. The tent should not be pitched near really tall structures, because this increases the chance of it taking a side flash hit. Another tip is to get down from high elevation parts of the terrain. While being elevated a little will keep the rain from soaking through your tent, being the highest up in any given area will make your tent a potential target in a thunderstorm.

Is it Safe to Sleep in a Tent During Lightning?

No. For the reasons explained, it is not recommended that you sleep in a tent during lightning storms. You will have no idea what is going on around you. There will be no way for you to follow the 30/30 rule. You won’t have time to reach a better shelter from the bolts. Moreover, if lightning strikes nearby as you sleep, the ground current will be inescapable.

What About Campers and RVs?

Is it safe to be in a camper during a lightning storm? This depends on the kind of camper you have. Remember, the best place to take shelter during the storm when no enclosed buildings are available is a metal vehicle. Lightning that could hit the vehicle will disperse around the surface of the vehicle, leaving you untouched.

If the RV or camper is made from metal, the full outer shell or at least the roof, then it is safe. The worst you can expect should the camper be electrocuted, is damaged electronics.

However, certain campers are made with fabric material, and many RVs are made from fiber-glass without an aluminum or metal frame. Those are not adequate shelters from lightning. They won’t create the Faraday Cage effect; therefore, you and your family would still be in serious danger inside.

The Best Way to Protect Yourself

The best way to protect yourself and your family from lightning storms is through prevention. We have discussed what can be done if you are not prepared before the storm hits. It is highly recommended that you monitor the weather before travelling to the campsite, and during the entire camping trip as often as possible. At a commercial campground, cell service may be available, so it’s possible to catch weather reports on the phone, tablet, laptop, or portable tv. When all else fails, keep a good radio handy on the trip, and listen to the forecast. Be proactive, campers.

reviwedAF is an independent website created by outdoor enthusiasts. The views expressed on this site may come from individual contributors and do not necessarily reflect the view of reviewedAF or any other organization.